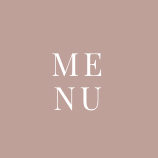 I love a good behind-the-scenes. I’m always interested when other creatives share how they did something, so today I thought I would share how I shoot! If you follow along with my blog or Instagram, you know that brand photography is a new-ish passion of mine and recently I was able to photograph an amazing styled shoot for the Crate and Barrel July/August Summer catalog with 100 Layer Cake. You can see my blog post about the full shoot here and to see more about the amazing vendors involved!

Today, I’m going to be highlighting a few of the shots I took that day while walking you through a bit of the process to get each shot. I’m thankful to my friend Heidi Ryder for joining me on set that day to assist as well as to take some of these shots of me in action!

First off, I want to show the basic setup for the shoot… 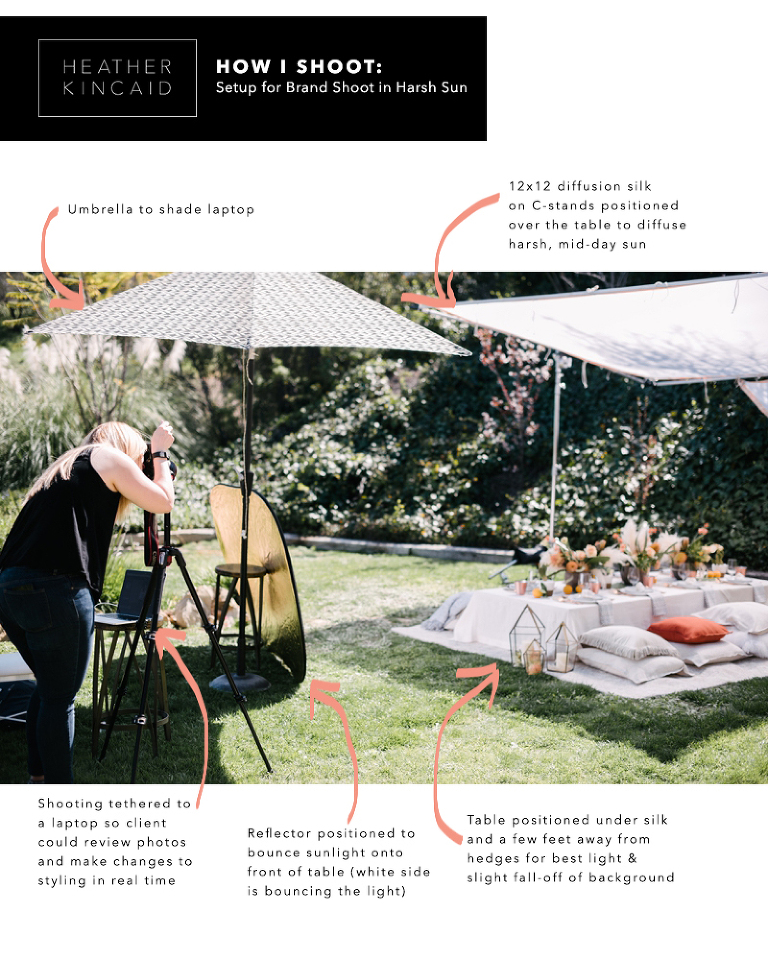 In planning the shoot with the 100 Layer Cake team, we knew that we were going to have to be shooting outside during the hottest, brightest part of the day. For most shoots, I try to avoid this at all costs, but because this shoot had to be outdoors, and because Crate and Barrel people were in Chicago waiting to see photos in real time, we had no choice but to make this work. So, I rented a huge 12×12 diffusion silk and some C-stands so that we could control the light over this table. This diffusion made for gorgeous, clean, glowy light and was the perfect solution to shooting in that awful mid-day sun.

I also brought along an umbrella under which I could set up the laptop (and myself for some of the shots, just not the particular shot pictured here). That day in the Valley was HOT. Don’t worry, I wore sunscreen. 😉

Finally, I set up a reflector there to the left and used the white side to bounce light back into the styled scene which just helped to light up the front of the table a bit. That side was obviously our focus for this shot.

And, below is the shot Crate & Barrel ended up using from this particular angle! You can see how even and clean the light is, and how it really makes the colors pop. Thanks to the sheer diffusion panel, there are still shadows and highlights, but they are soft and pretty. 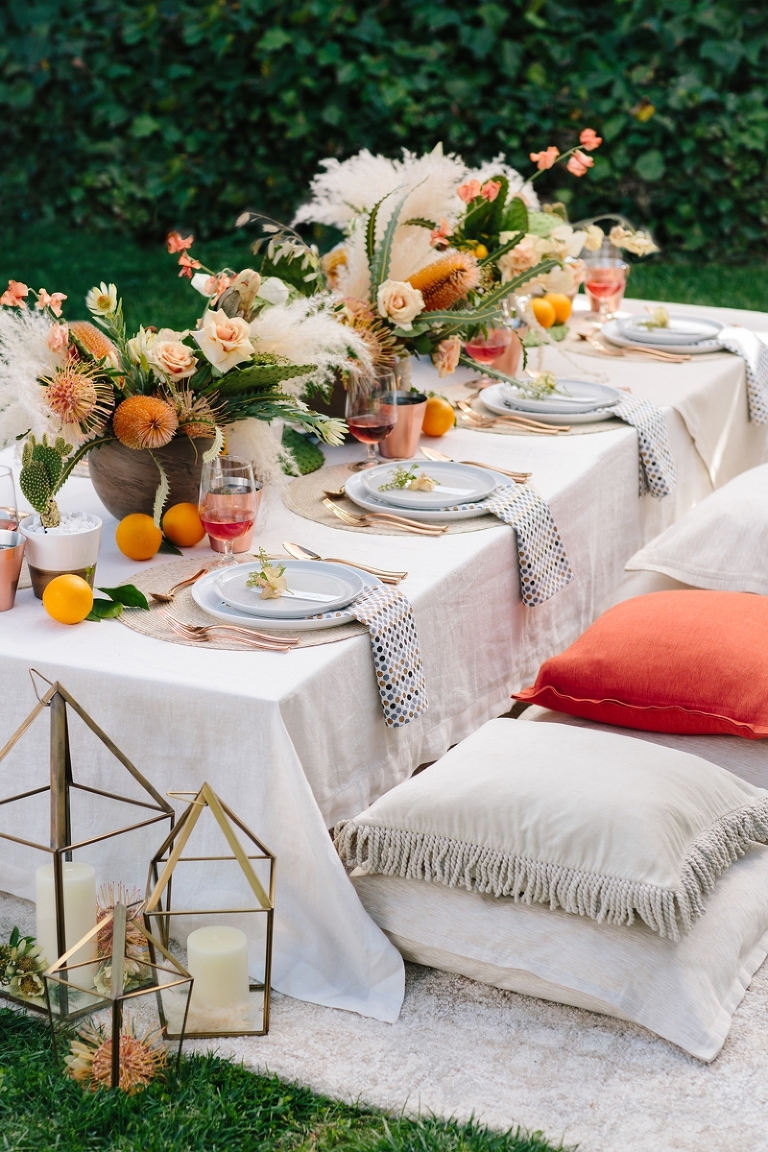 Here’s another BTS shot that shows the whole scene pulled back a bit. That’s the 100 Layer Cake team doing their thing and perfecting some floral details for the winning shot. In this shot, you can also see a smaller 8×8 diffusion silk we tied onto the frame of the 12×12 to diffuse a little more light that started to come in as the sun moved. So glad I over-prepared and rented that extra piece, too! 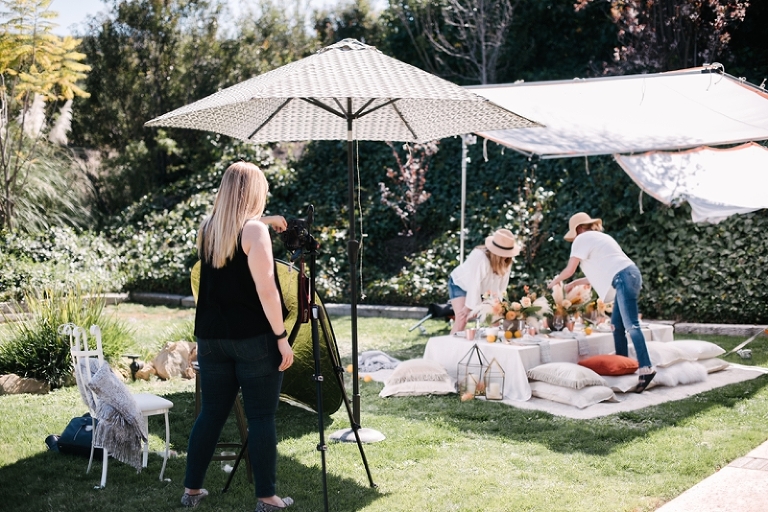 With that same setup for the whole part of this shoot, I made sure to get many different angles of the details to make sure C&B had plenty to choose from. Here are a few shots of me shooting followed by the shot I took from that angle. 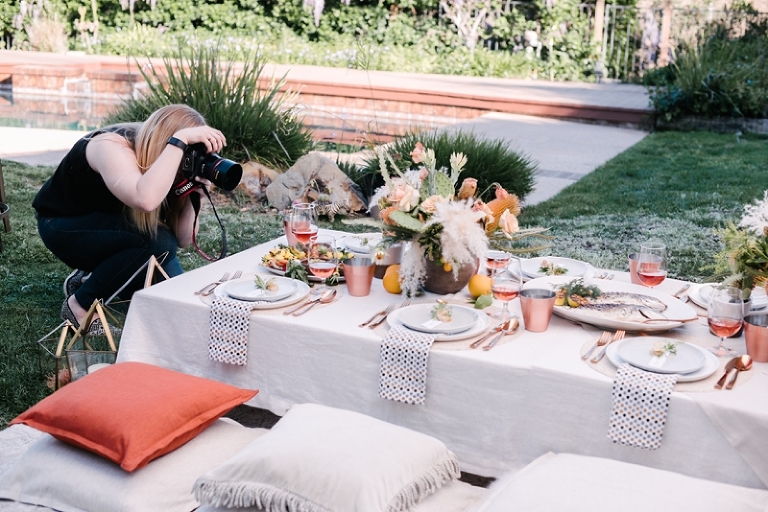 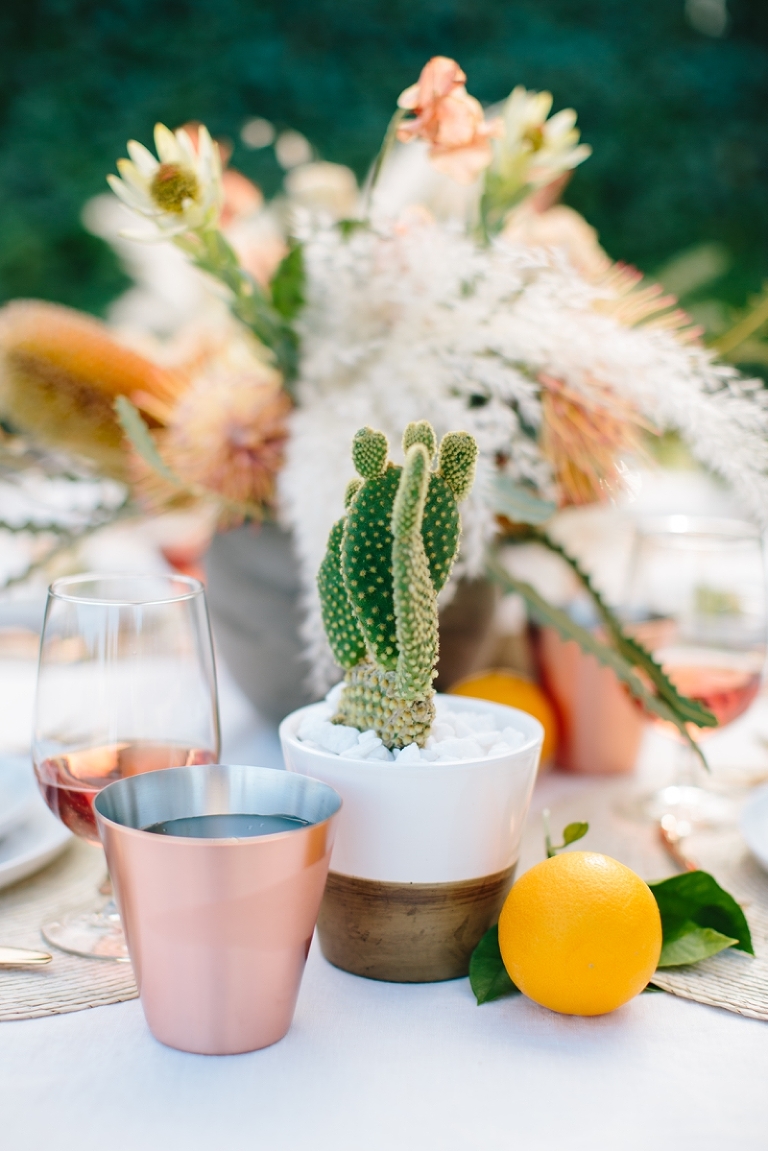 Here, I’m setting up and shooting a food detail unrelated to the table setup, but the light was so good under that silk that I used that same light setup for this shot, too. On-set, everyone is busy, so sometimes as the photographer you have to assist the stylists and make sure all the little things are lined up perfectly, as I’m doing in the left image below. 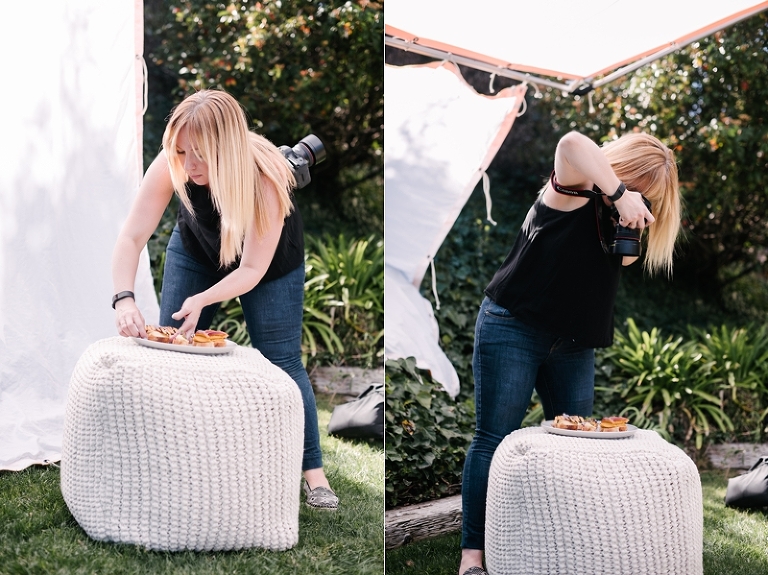 For some of the wider overhead shots of the tabletop, I was up on a ladder. But for this shot of the single setting, I was able to shoot from the ground… on my tip-toes. 🙂 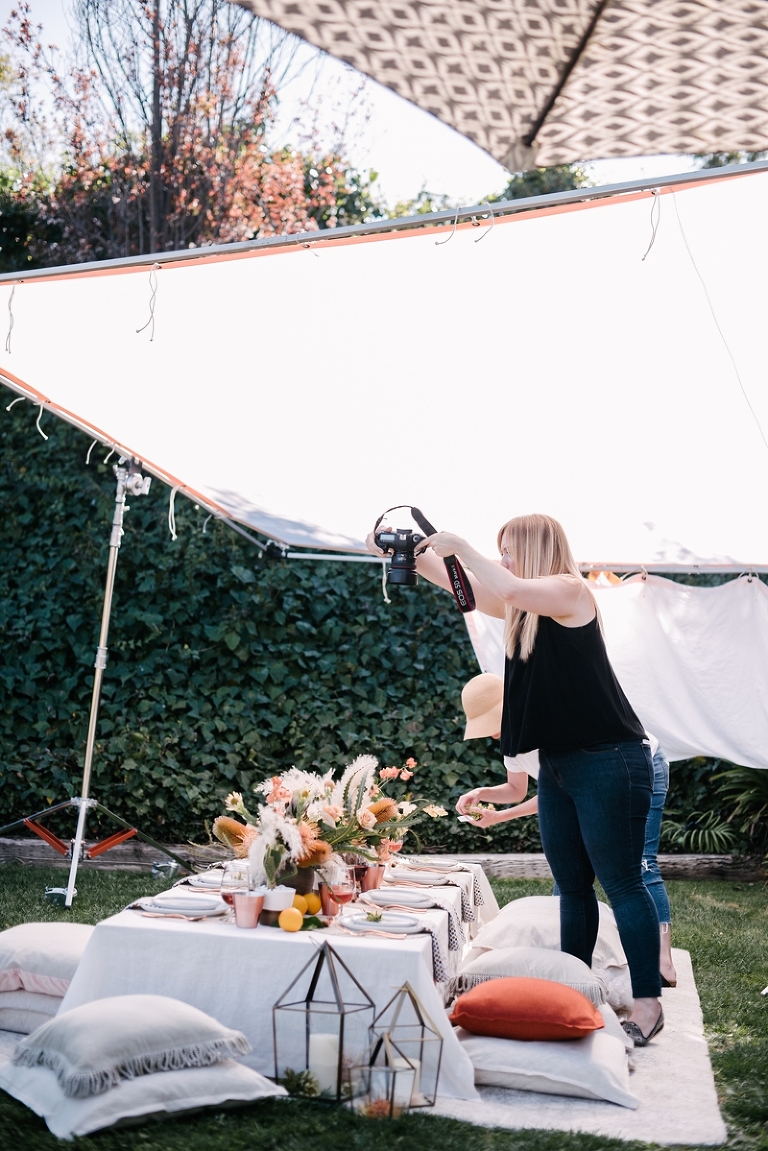 This particular shot was an option for Crate and Barrel. We shot one with the name card on the plate, and one without so they could choose between the two. Always important to try a few different options for each setup- you never know what the client will prefer when all is said and done! Also, you can see me in the reflection of the spoon here, which I Photoshopped for the final feature. 🙂 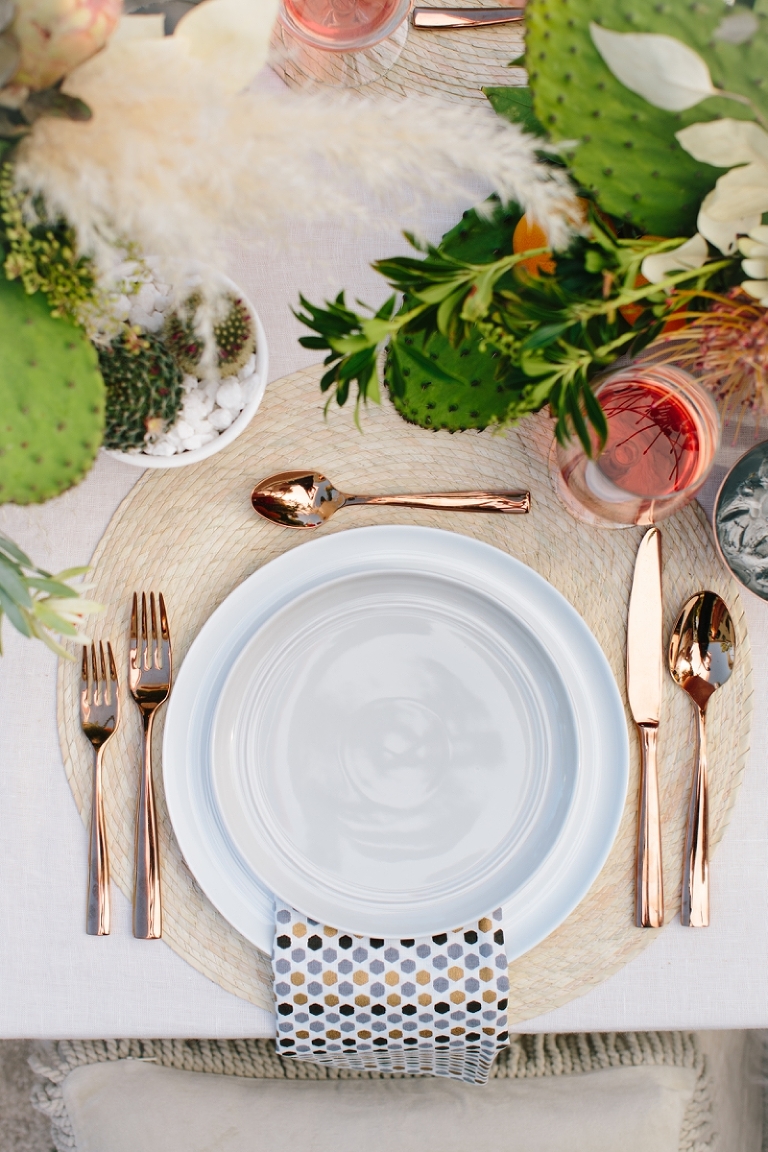 Adding a little human interaction to any shoot is important. This was a different setup for the same shoot. Thankfully, it was later in the day and the sun was lower in the sky so we had even shade here and no need for diffusion. Just straight up shooting in the open shade! 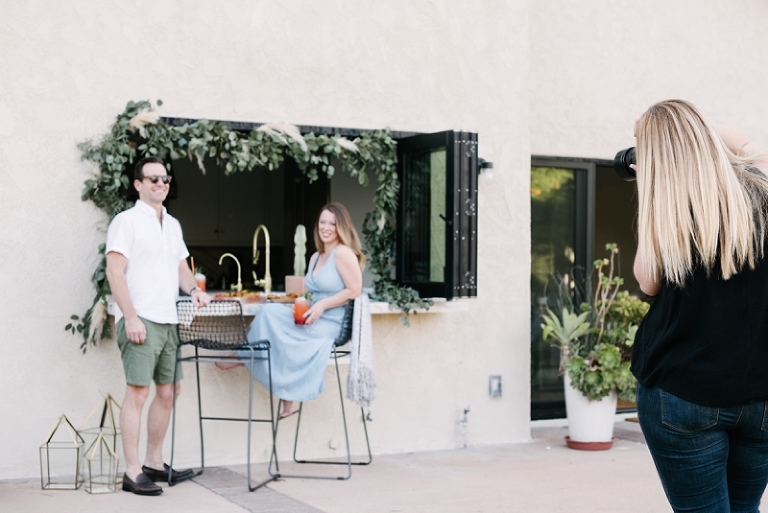 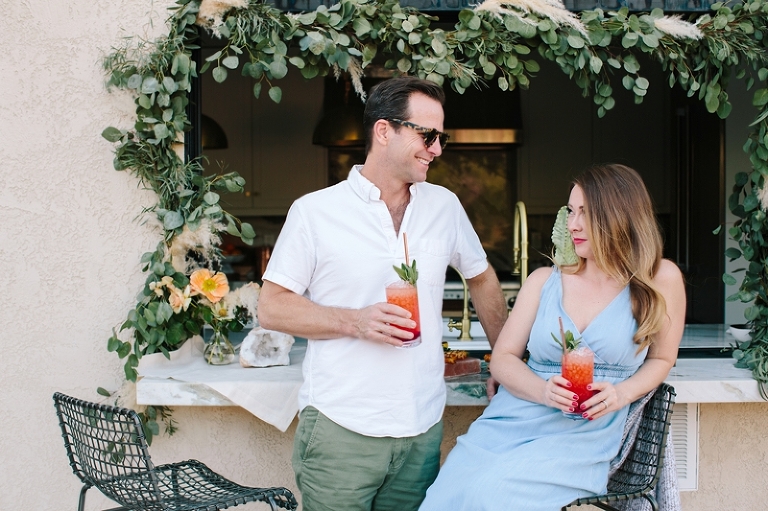 I hope that was fun to see a bit of how this shoot came together! If you liked this “How I Shoot” post, let me know in the comments so I can motivate myself to write them more! Also, you can see another I did like this here on how to shoot portraits in reflected light. However, I must warn you that this was posted 6 1/2 years ago! My style of imagery has improved quite a bit, but I just re-read this post and I still find it to have solid info. 😉

- BACK TO BLOG FRONT PAGE - 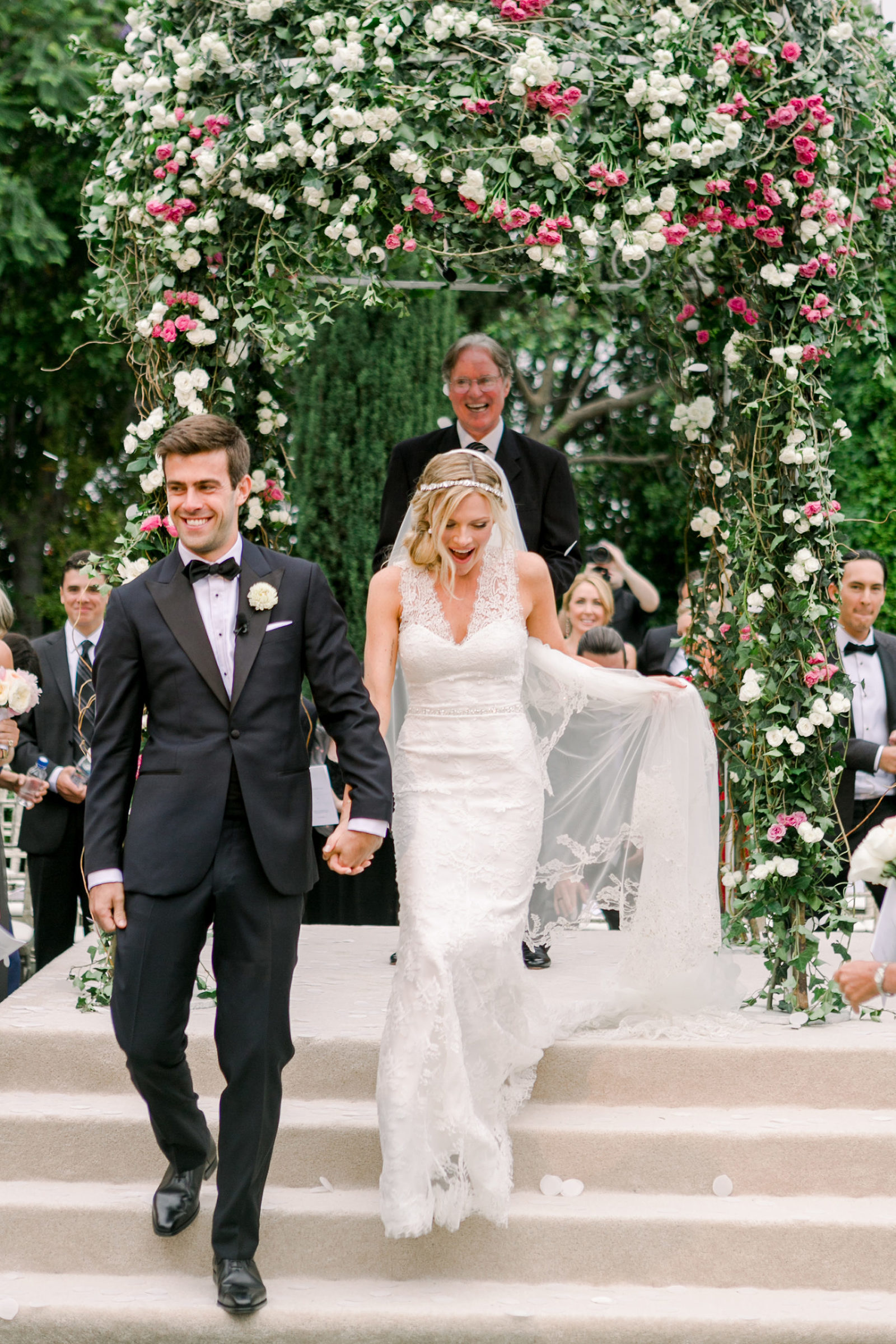 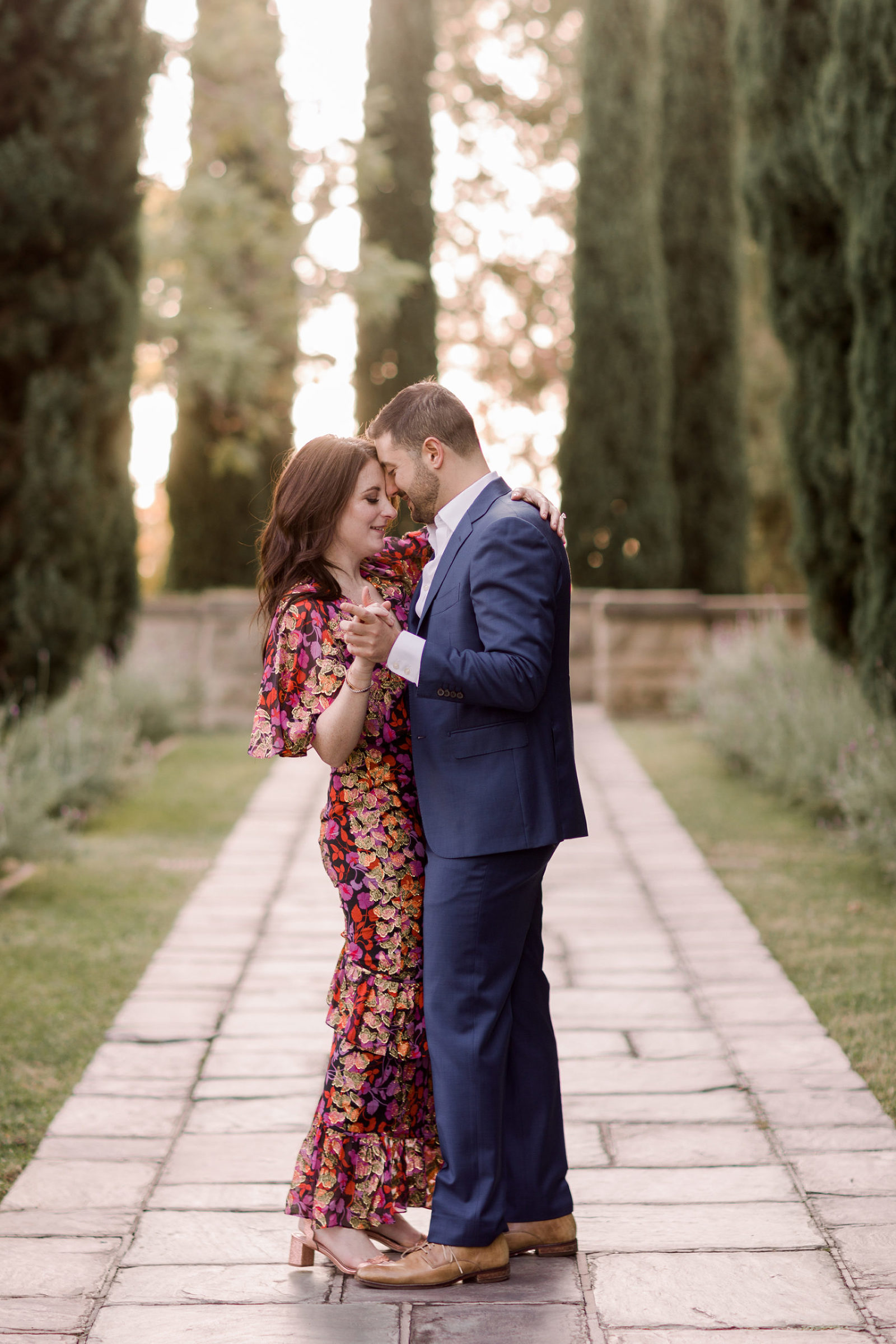 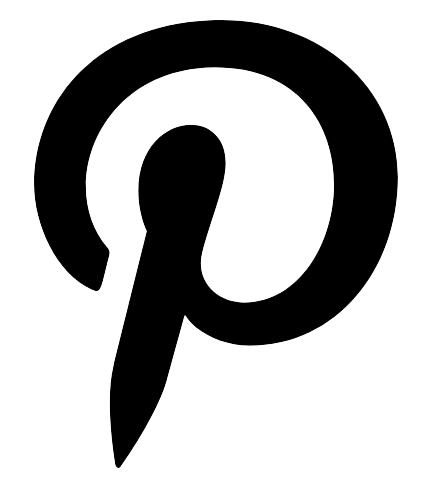